The NIAA state swim meet at Jim Reitz pool hosted a state first in the girls 50 free. Rye had been tied with four other girls until today where she became the first female student athlete to win the 50free in 4 consecutive state meets.

Rye’s personal best time of 24.25 moved her into new territory. This was the last meet for the Senior who will swim for tje Rebel’s next season. Rye also defended her 100 free title im the same meet with a time of 53.64.

Kate holds six individual records for Incline swim team to go along with the NIAA state records as recorded since 1987. 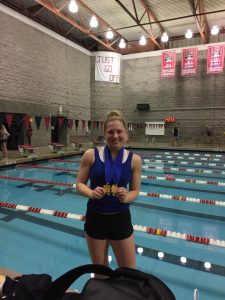