Highlanders step up at Northern Regional 2A meet in Yerington, Nevada. Gusting winds and cooler temperatures could not cool down the team.

The ladies took the top three spots in high jump and long jump. Incline’s team of fantastic came away with gold in multiple events.

High jump sophomore Sammantha Giangreco took top honors with a height of 4’10”, 2nd place senior Hailey Carlson, and Millie Jenkins took 3rd.  Just a few weeks ago Jada Moore injured her knee ending her freshman track season as she would have been in the mix for the 4th and final state qualifying spot.

The ladies would move onto long jump where Millie Jenkins took 1st, Junior Emma Perrel 2nd, and senior captain Belle Johnson took 3rd. This was a tough jump athletes had to run into a head wind for the sand pit.

Millie Jenkins would finish 2nd in the 100-meter hurdles just after competing in High jump with only a few minutes rest.  Giangreco would move onto discus taking 4th place and qualifying for state.

The Cleary boys took 3rd place in different events. Senior Noah Cleary had his best day on the vault at 9-06. Freshman Dylan Cleary took 3rd in the 100-meter both brothers will compete at the NIAA State Meet in Carson City next week.

One of the contested events of the night as the lights came on and temperatures dropped was the boys 3200-meter race. Incline’s freshman Niklas Pietzke was in 7th place off the pack through 4 laps. North Tahoe lead the way with 4 members as Pietzke and senior Kirk from Yerington moved deep to the front. With 2 laps left Pietzke was just behind North Tahoe using them to shield from the cross wind and conserve energy. Pietzke followed Kirk as he moved to 1st and Pietzke out sprinted North Tahoe on the final 60-meters to take 2nd place.

Drama unfolded in the 1600 meter relay when freshman Sebastian Hernandez accidentally stumbled in another competitor from Silver Stage. What looked like another 3rd place finish for the group of Dylan Cleary, Brad Rye, Hernandez, and Dillon Jenkins lead to a disqualification.

Another day for the girls taking top honors.

Belle Johnson who qualified last year in Pole Vault, jumped to 1st place with a height of 8′. Johnson is seeding the highest heading into the state meet next. 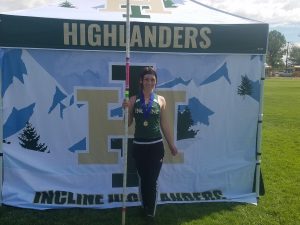 The ladies would grind out another win in the 400 relay as they too lead the state in this event!

Freshman Dylan Cleary is making 3 his number as he took 3rd in both the 200-meter and 400-meter sprints.