Final invitational before regionals took place at Nevada Union high in Grass Valley, California. Highlanders traveled with 12 athletes nestled in the foothills of the Sierra’s.

Incline’s freshman Millie Jenkins took 1st in the last contested event of the day in high jump. She passed teammate Samantha Ginagreco’s school record to set a new height of 5’2″. Jenkins “I stayed in my arch more and took a faster approach.” Giangreco would finish in 8th place at 5’0″ and set a season record in the 100-meter of 13.76 and another 8th place in discus of 89′.

Jenkins started the day in the 100-meter high hurdles finishing in 5th place at 17.30.

Junior Dillon Jenkins set a personal time of 56.53 in the 400-meter. Jenkins was part of the distance group before moving to the middle distance where his endurance and power will set up Relay teams for Regional tournament in Yerington next week.

Incline will compete in the Northern 2A Regional tournament beginning Friday at Yerington High School. The top four competitors in each event will move on to the NIAA State Tournament in Carson City May 18-19th. 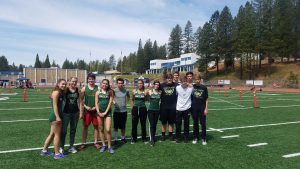